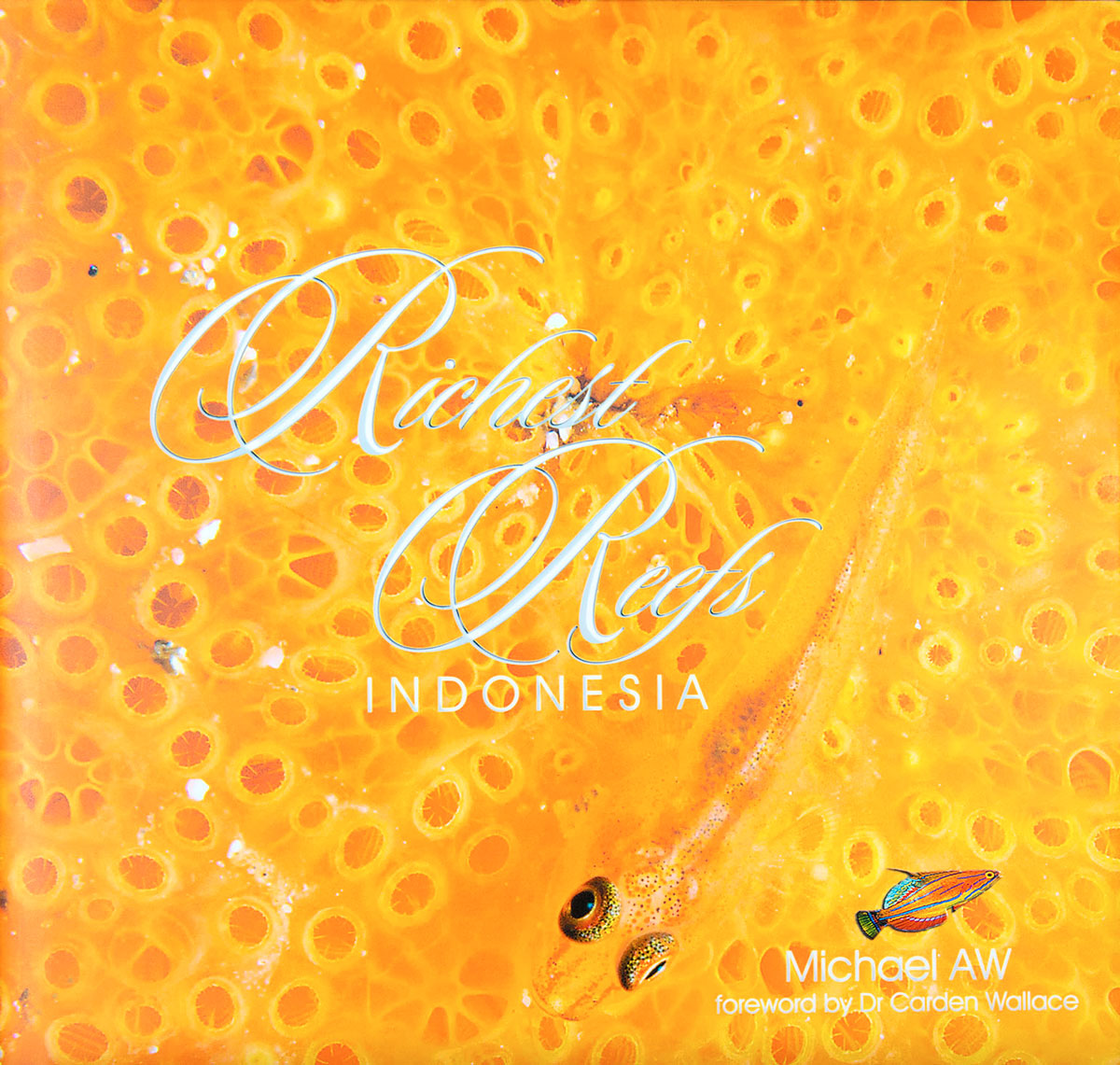 “I would like to congratulate my team for taking initiative to produce this book and the imagery of Michael AW which so incredibly summarizes the grandeur of our natural heritage into this fine work of art. I do hope that beauty of the images encapsulated in this book encourages the people of Indonesia and all the nations in this world to preserve the quality of our world’s richest reefs.”
President Megawati Soekarno Putri

The images in ‘Richest Reefs’ represent Michael AW’s finest work, selected from a library of 150,000 images. Encapsulated in a high-quality 180- page portfolio, it will be the benchmark for all future beautiful books of the sea. Michael AW is also the author of ‘Beneath Bunaken’, ‘METAMORPHOSEA, ‘Celebrate the Sea’, Dreams from the Rainbow Sea’ and the recently released Underwater Jungles- Sarawak. His books have been selected as Gifts of State by the Governments of Indonesia and the Maldives. No expense was spared to produce ‘Richest Reefs’. With the latest six-colour printing technology, the book is printed on 150 gsm matt art paper in a generous 280cm w x 268cm format – case bound. This book has been adopted by the Ministry of Culture and Tourism, Republic of Indonesia as official gift for the country.

‘Richest Reef – Indonesia’ is a product of Michael AW who has made 50 photographic trips to Indonesia from 1992 to 2003 . The book is a chronicle of his best underwater images from the heartland of bio-diversity – the richest in the world. Leading biologists in the world agree that the reefs of Indonesia have the greatest concentration of corals and fishes. Biologically, it is Planet Earth’s Richest Reefs. The exquisite volume is illustrated by some of the most beautiful images of the sea, showing off the richest reefs of the Indonesian Archipelago; there are old images, new images and many award-winning ones from Bunaken, Lembeh Strait, Togeans, Bali, Komodo Alor, Tukang Besi and the presented in this portfolio are images from Raja AMpat – most recent documented reef system rated by leading marine scientists as the most valuable cluster of reefs in the world.

The stories within Richest Reefs reads like a diary of Michael’s photographic sojourn, celebrating the richness of the reefs, his concern for its preservation and sustainable development. An excerpt from the foreword of Dr Carden Wallace testifies to the beauty ‘Richest Reefs’- “In this book Michael distils what has made diving and photographing throughout Indonesia so special for him. He does this firstly in the way he excels – his stunning photography. Underpinning this is a true naturalist’s knowledge of the behavioural patterns of his subjects, the underwater creatures, and a special ability to bring out the best in them for the camera. In addition to this I’m sure you will detect from this book something much deeper, a genuine appreciation of the marvellous underwater places that Michael documents. If you are from “outside”, this book will make you itch to visit or re-visit these special reef places.”

About Richest Reefs Indonesia
Eminent scientists estimate that over 3200 species of fish are found in Indonesia compared to 2500 in the Philippines and 1800 in the Australian Great Barrier Reef. Corals and invertebrates follow the same trend, with many species common here rare or non-existent in other parts of the world. In 1993, the American Cancer Society appointed a marine lab to collect 5000 species of marine invertebrates, (hard coral, shell fishes excluded) for cancer research from reefs close to Bunaken Marine Park in Manado. The estimated time frame for such collection was 6 weeks; the team hit the objective of 5000 after just three weeks of work. This illustrates the richness of our marine parks.

The expanse of Indonesian waters covers over 80,000 km of coastline incorporating over 16,000 islands harbouring some of the most prolific coral realms in the world. The variety offers a life time of exploration; walls covered with soft corals that plummet to abyssal depths, predictable manta encounters, jellyfish lakes, underwater volcanoes, critter havens and the most famous wreck in Asia – the Liberty ship in Tulamben, Bali. The locations featured in this book are the crème de la crème of our coral kingdom; each location is special in its own way – Bunaken, Lembeh Strait, Alor, Bali, Komodo, the Berau Islands, Togeans, Tukang Besi and finally Raja Ampat which authors from Asian Geographic and National Geographic described as the bull’s eye of marine biodiversity.

The reef systems are extraordinary and the terrain, embellished with lush ornamental coral meadows, gorgonian forests and reef fishes are the most lavish of our ocean planet. Richest Reefs Indonesia is the showcase of Indonesia’s underwater heritage. As much as we take pride in our natural heritage, it is also in our philosophy that we place emphasis on the balance use of our resources and conserving them for our future generations. Though marine tourism is an integral part of sustainable development, we realize that the marine environment is a critical asset for tourism attraction thus becoming an effective incentive for conservation of our natural environment.